We have been collaborating as a group to write this narrative about a farmer?

Toma P1. Once there lived a farmer who lived in the farm with his wife.They were going to the barber for a haircut. His name was Joey he was a silly farmer. He would always get bored because of his job, he was a trucker.

Datanian P2. When the trucker was driving he was falling asleep. He was going to a cliff, Joey was very tired and he was about to fall of the edge. But he got saved by a flying cow that he use to mock, it was a miracle!

Maurice P4. Then when he woke up he had remembered that she was his wife, the girl standing there was his wife.He was so happy to see her again. Joey was filled with happiness once more.Then in the end they were both happy to see each other again.

this week was faster ways to do pluses faster

If I could change one thing about this week it would be not fighting anyone
Posted by Toma at 19:18 No comments:

P1: In the holiday I went no where. All I did was lay down in bed and play games on my brothers PlayStation two and my cousins Xbox live. We just played rugby, battlefield two and the the getaway black Monday it was cool.
P2. Then we went to the park every time! We went to the park I would always moan and say”I don't want to go the park”! But would my mum listen no she would say “Come on lets go”.Thats when my holiday got boring and stink too.

P3. Then after that we just had relaxing time in bed and on our games it would always be cool stink and then cool stink for long.Then finally it was the third to last day of the holidays. I was happy a little bit and bored.When it was the second to last day we made our own cupcakes and cookies and for dinner we had hot cocoa cheese toast and went to bed.

P4. In the end of the holidays I was bored I was cool and I liked playing on the game and i wish i could get more sleep. 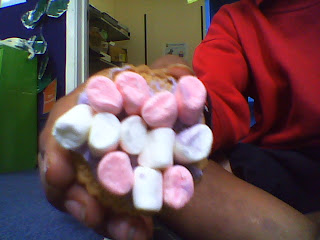